We develop tomato cultivars for outdoor cultivation with participatory, organic breeding. Commercial horticulture, trade and processing, botanical and amateur gardens, extension services and research work together nationally and internationally. Results and materials are continuously made available at this site. Contact via Freiland-Tomatenprojekt[at]uni-kassel[dot]de

Some insight into the Organic Tomato Day 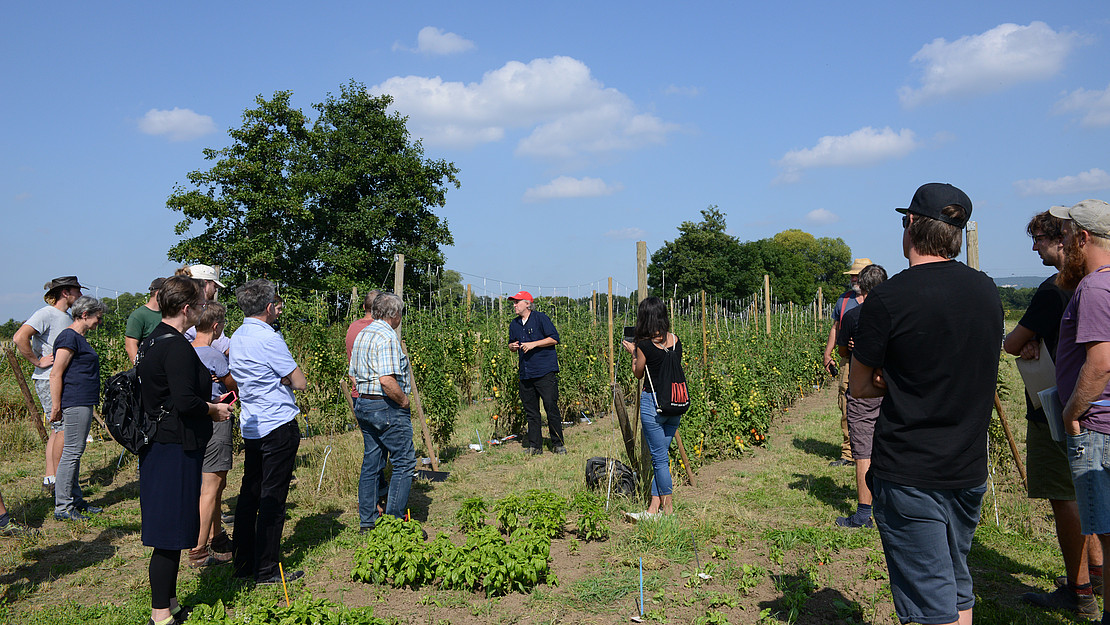 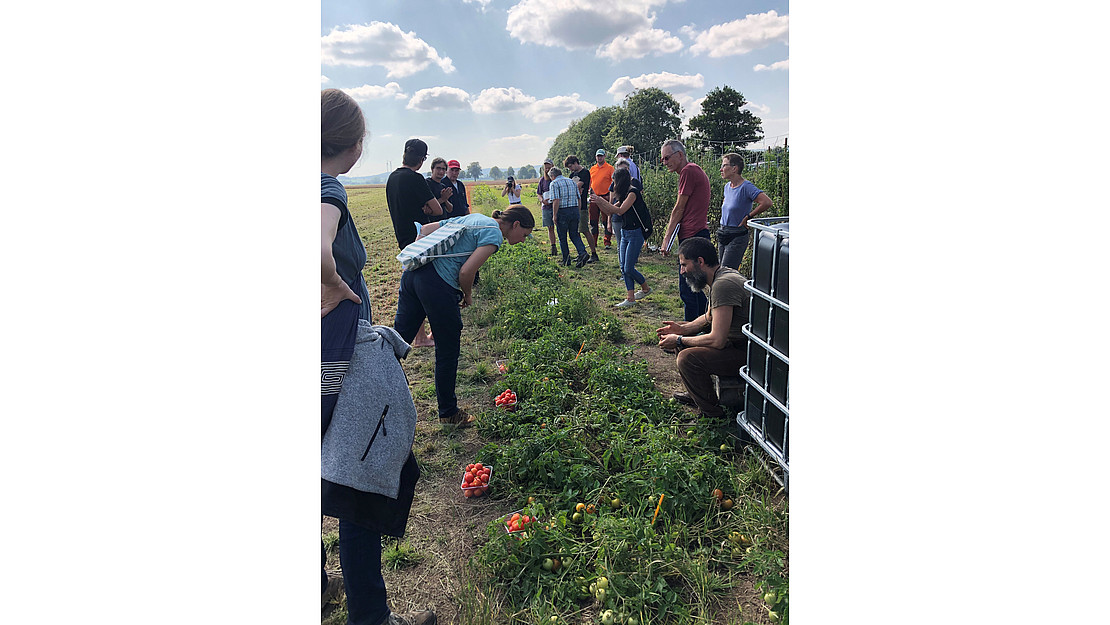 Tasting of bush tomatoes at the Organic Tomato Day 2021 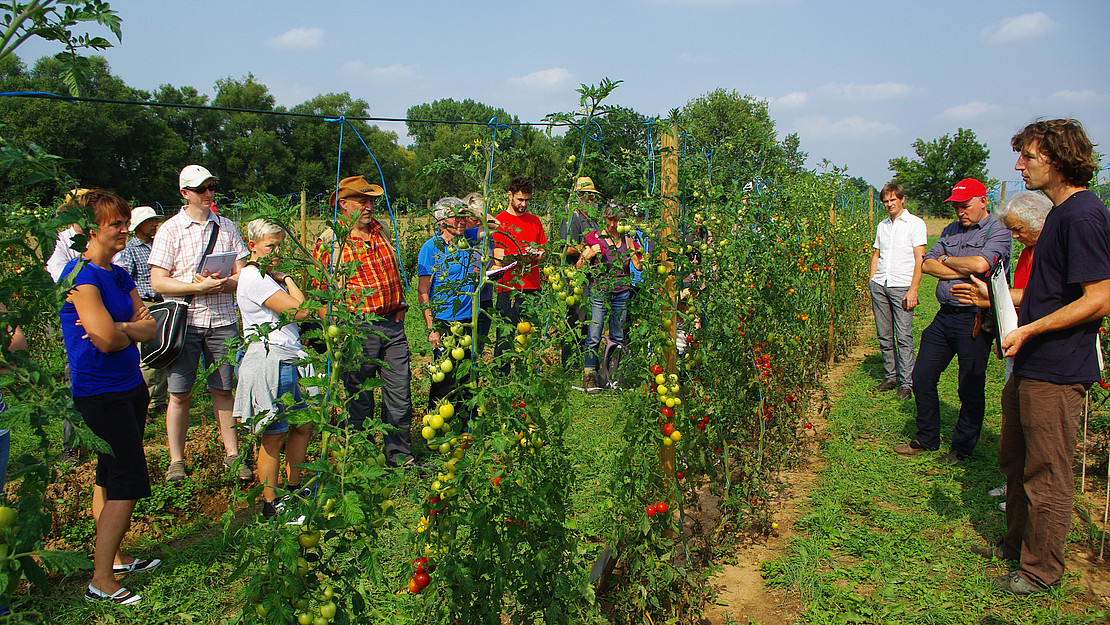 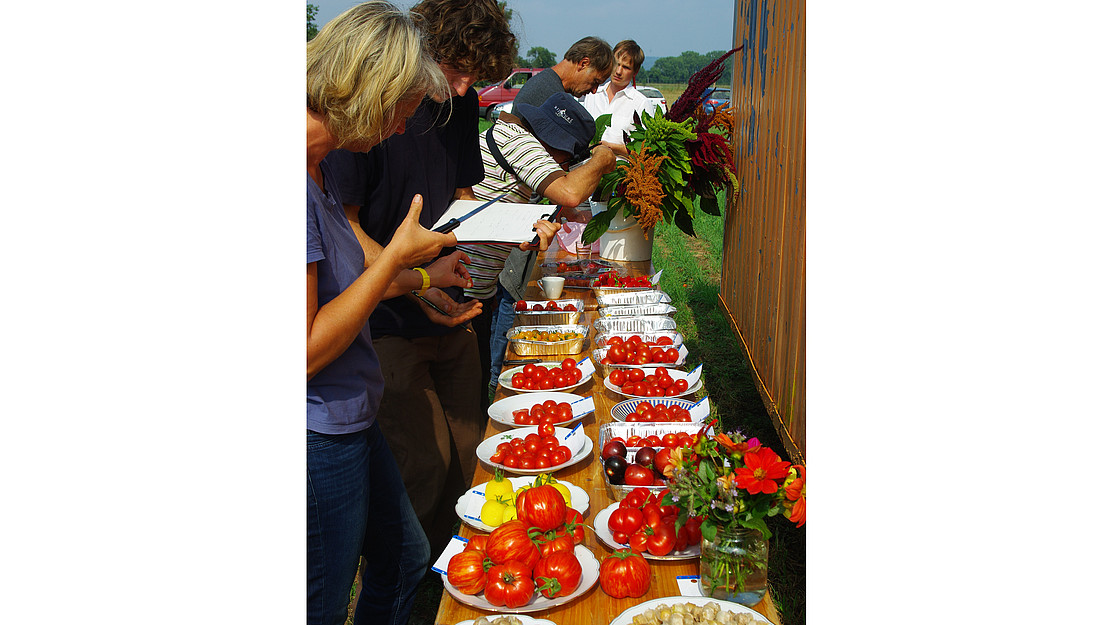 The Organic Outdoor Tomato Project led by Dr. Bernd Horneburg started in 1996 with observations on field resistance in several seed nurseries and in 2003 nationwide with up to 34 trials in Germany. Specific work is carried out internationally (e.g., Horneburg & Myers 2012, Miles et al. 2010, Steinschneider et al. 2017). The project is based on the free exchange of knowledge and seeds. The Open Source Seed Licence was introduced with the cultivar Sunviva (Kotschi & Horneburg 2018, Kotschi et al. 2017). The breeding program is based on great plant and human diversity and can therefore react quickly to new challenges.

Background: Globally and also in Germany, tomatoes are the number one vegetable. In Germany, only a small part of the demand is produced, although tomatoes are grown in almost every market garden. Processed tomatoes, the largest part of consumption, are almost 100% imported. A major limiting factor to the expansion of tomato production is the difficulty of growing tomatoes outdoors, which is much more resource-efficient and cost-effective than production in greenhouses and polytunnels. Production is severely limited by Phytophthora infestans, the fungal pathogen that causes late blight. In the 1990s, the pathogen had become so virulent that commercial cultivation in the open virtually came to a standstill (overview in Horneburg & Becker 2011). Even in protected cultivation, P. infestans can cause considerable damage if temperatures drop below the dew point.

Resistance breeding against P. infestans is the central pillar. Since infestation is not to be expected at every location in every year, breeding nurseries are established in the network at several locations. Research has been conducted to determine which resistances are effective (Miles et al. 2010, Raj 2019) and the selection methodology has been improved (Horneburg & Becker 2011). Potential sources of resistance are continuously included.

Fruit quality is on the tongue in tomato; it is given special consideration in the breeding program. The “Breeders’ Sensory Test”, an efficient method of testing a large number of small samples with a small team, was developed in the project, used with success (Eghbal 2015) and has now also been scientifically studied (Hagenguth et al. 2022). Quality testing plays a major role in parental selection (Mohammed et al. 2019 and 2012), as well as for selection and release of cultivars (Zörb et al. 2020). As a precaution against fungal toxins, resistance to Alternaria solani was investigated (Wojciechowska et al. 2014).

Cold tolerance, nutrient efficiency and drought tolerance as elements of general robustness are indirectly selected for. Robustness results in reduced dependence on irrigation and fertilisation, and plants can become productive again after periods of infestation. Most cultivars are also interesting for cultivation in containers. In protected cultivation, two or three shoots are usually required.

Bush tomatoes for container cultivation in urban gardening and processing for direct marketing and in community supported agriculture (see below: Scholz-Döbelin nursery) have been worked on since 2019.

The participation of active members of the value chain is possible and desired, from simple practical tests to extensive trials. In addition to commercial horticulture, we are currently looking in particular for:

Funding: The project is made possible by personal commitment. Important sections were funded by the Rut- und Klaus-Bahlsen-Foundation, BÖL, BÖLN, Zukunftsstiftung Landwirtschaft, EFRE, Software AG-Foundation and the Lower Saxony Ministry of Food, Agriculture and Consumer Protection.