The annual CINSaT Autumn Colloquium was held on Wednesday, November 18, 2020. In contrast to other colloquia, this year's event was not held in the usual lecture hall 282 at the Heinrich-Plett-Strasse location, but virtually via zoom. In the auditorium, numerous professors, postgraduate and doctoral students as well as bachelor and master students from various disciplines were eagerly awaiting the presentations of the guest speakers.

As in the past years, various disciplines could be served, whereby, as in the previous year, a young researcher was fortunately represented among the speakers. Due to the transfer from a face-to-face to a purely online event, the poster session, which was otherwise always very well attended, could unfortunately not take place. 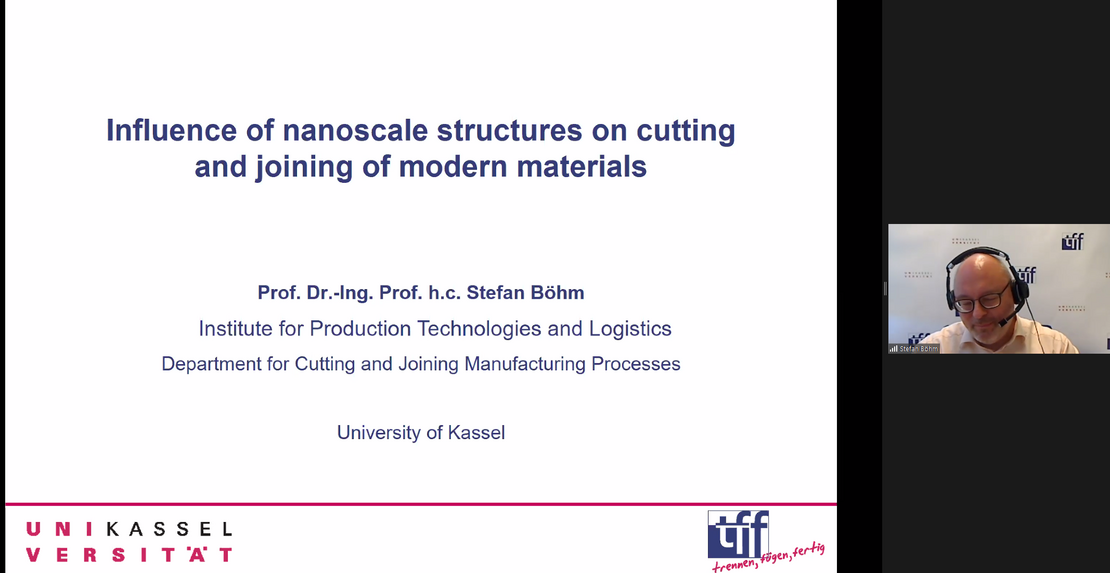 The event began with a warm welcome speech by CINSaT speaker Prof. Dr. Johann Peter Reithmaier, who introduced the first part of the lecture series, Prof. Dr.-Ing. Prof. h.c. Stefan Böhm.  Prof. Böhm gave his presentation "Influence of nanoscale structures on cutting and joining of modern materials" to the CINSaT members, which is part of the admission procedure as a full member. Starting with the field of surface modification on the micro- and nanoscale by means of laser, electron beam or pickling/etching, he led to the field of adhesive modification, e.g. to enable debonding on demand, but also fast healing, visualization of damage or energy storage. In the next section, he reported on electron beam welding in the micro and nano range, as well as surface modifications, such as cleaning, polishing or engraving, using electron beams. As the last big topic he explained the additive manufacturing by laser metal deposition, before he briefly presented the LOEWE project Allegro, of which he is the speaker and which deals with high performance components made of aluminum and aluminum alloys. The overview of the equipment available in the working group as well as the already existing networking with CINSaT members at the end of his presentation was impressive.

After a half-hour coffee break, which could be used to consume the provided snack bags and to relax the eyes, Dr. Marilia M. Horn gave a lecture entitled "Renewable resources for nanocomposites". The young researcher from the Working Group Physical Chemistry of Nanomaterials first gave a general introduction to renewable or recyclable materials, their production and use, before building a bridge to her own research topics. In addition to nanoparticles and hydrogels for the active drug delivery system based on chitosan, she reported on the functionalization of porous collagen scaffolds for supportive wound healing, as well as the modification of the properties of biopolymers to make biomass waste reusable and return it to the recycling cycle.

The last presentation of the event with the title "Waves in Random Media - From Order to Disorder" was held by Prof. Dr. Regine Frank from Rutgers University, New Brunswick, who currently holds a substitute professorship at the University of Kassel in the Working Group Physical Chemistry of Nanomaterials. In her lecture she first introduced the definition of order, disorder and randomness, before she then continued with some experimental work on the topic, focusing on the transport of light in disordered media using the example of ensembles of Mie spheres. The presented data was explained with the corresponding theory and results were compared.

In summary, this year's Autumn Colloquium was also very successful as an online event, although networking was missed during the breaks and poster session and will hopefully take place again in 2021.