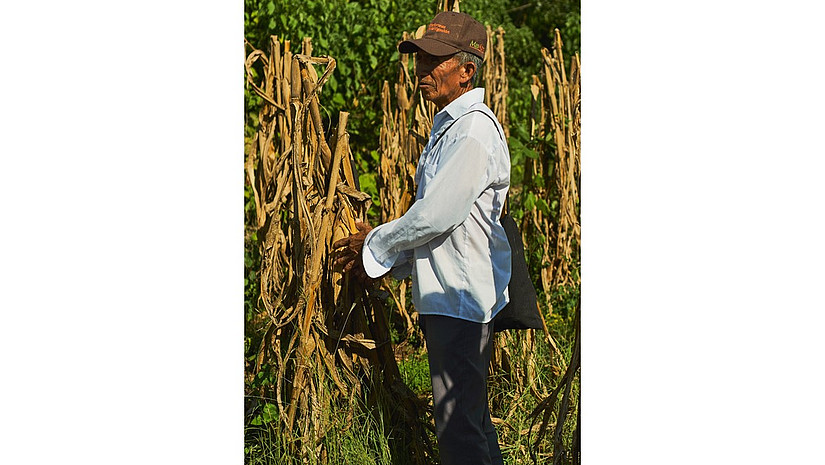 Picture description: In Yucatan, the agricultural work of rural households has allowed the promotion of agrobiodiversity despite being carried out - in most cases - in precarious situations.

Project's aims:
Interrogate conventional understandings of ‘decent work’ and its assumption that this is essential to the pursuit of a ‘decent life’ for all

The proposed project will address these relationships with a special emphasis on the impact of migration, the influence of off-farm wage labor jobs on agrodiversity, how youth and elderly people perceive farming as a livelihood, and identify ecological and socioeconomic indicators to assess the sustainability of agroecosystems. Socioeconomic and qualitative agrodiversity data will be obtained through surveys among different groups and interviews with key informants; the data will be analysed by econometrics and multivariate analysis. An assessment of agrodiversity in participant communities will be conducted considering land use stages and field types of the communities and using vegetation analysis methods.

This project has contributed to understanding the interaction between decent work, agrodiversity and migration. Elderly and young people in rural communities have mentioned that agriculture is decent work but most of them consider it an activity that is risky and not well paid. Agriculture is the main economic activity in rural communities of the Yucatán but local people migrate to other cities in the State, to other States in Mexico and to the United States for better job options, and as a consequence, agrodiversity is being lost in the region.

Results showed that 20 percent of farmers interviewed find the income gained from agriculture good or very good, while 60 percent of respondents whose main occupation is agriculture think that income gained from agriculture is regular. It is interesting to note that 30 percent of people whose main occupation is in the service sector think agricultural income is bad. The amount of hours producers work per day is usually higher than eight and they work at least 6 days per week and very few have vacations. Around 80 percent of families have access to medical services in their own community. Only a third of respondents think agricultural productivity is sufficient to support all family members working in agriculture. Nonetheless, half of them still think agriculture is a good employment opportunity and is good for consumption or marketing, but it needs support from public policies and sufficient input to be a good opportunity. It is interesting to point out that half of the respondents stated they work in agriculture out of tradition rather than choice, while 18 percent of them simply had no other choice because they didn’t study.

Agrodiversity in the Yucatan is important; unfortunately it is being lost is due to the abandonment of this activity. There are 18 native fruit species in Yucatán and only 3 of them are commercially produced. Many of them are not produced any more in home gardens. An option that benefits both local communities and conservation in situ of agrodiversity are community agroforestry plots. We have described and followed up six of them which are successfully producing several native vegetables and fruits.

In 2013, the Yucatán State Government initiated a program to promote organic vegetable agriculture in home gardens in order to improve the diet of local people and to have food security. The ICDD cluster is currently working together with the NGO “Programa de Acción Forestal Tropical AC” (PROAFT) and the Secretaria de Desarrollo Social in the assessment and improvement of this program with the financial support of the United Nations Program for Development. The design of local agencies for human development, which includes policies and strategies to promote and include decent work pillars in agriculture, are being considered.