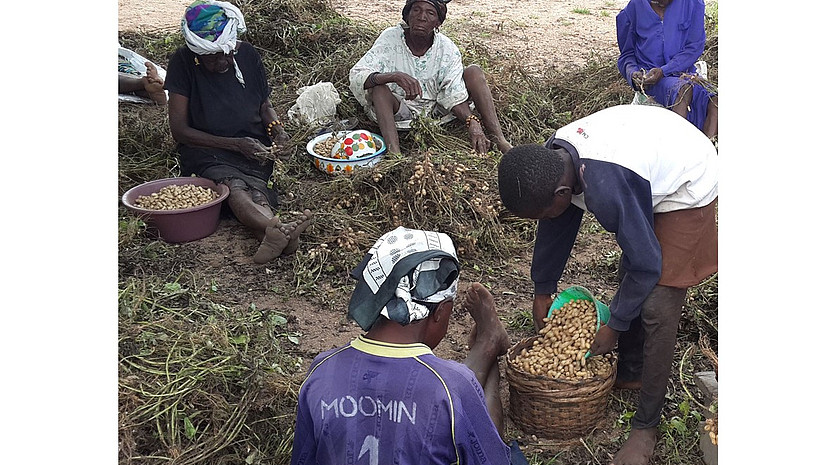 Picture description: Women Weavers in Wa
Groundnut farming and processing are traditionally women’s tasks in Ghana’s Upper West Region. The processes happen to be labour intensive.
The aged women in this picture are picking groundnut pods off the vines after harvesting. Each one will earn some amount of the nut-filled pods as income for their efforts.

Organising vulnerable work, or what is referred to as precarious work, is the biggest challenge facing the global labour movement today. Until recently, these workers were dismissed as unorganisable. They were seen as atomized, geographically dispersed and unable to pay dues raising tremendous collective action problems. Increasingly they are being organized – street vendors, domestic workers, home-based producers, waste pickers and other low-income workers are being mobilised. In large part, they are rejecting traditional trade unions and forming new types of organisations that bring workers together to promote their rights and interests. In the USA, we see the emergence of worker centres. In South Africa, casual worker advice officers, in India, informal workers use the democratic electoral competition amongst different parties to promote their demands and Ghana has a long-standing trade union presence in the informal economy. The question we are trying to answer in this research cluster is: how do these workers organize, what form does it take, what strategies do they use, what sources of power do they draw on, what are their relationships with traditional unions and how are traditional unions responding. In order to capture these experiences effectively, we are partnering with progressive trade union movements in the three countries – in SA, it is the Cosatu task team on Organising Vulnerable workers, in Ghana, it’s the informal desk of the Ghanaian Trade union Congress and in India, the Self Employed Workers Association (SEWA) and NGOs such as LEARN.