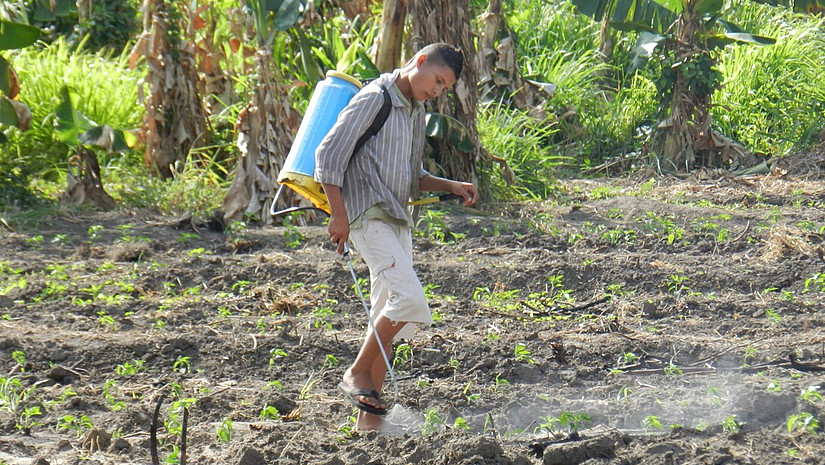 Picture description: Safety and health at work as a vital component of the decent work agenda. The photo shows a young man applies pesticides to a bell pepper plantation without proper protection.

Project's aims:
Developing a diagnostic instrument to measure progress towards more and better jobs in the province

South African researchers attached to an ICDD research cluster on work, livelihoods and social insecurity in the 21st century: comparing India, Brazil and South Africa, have been commissioned by the Gauteng department of economic development to advise the government on how to achieve the goal of decent work in the province. Led by Professor Edward Webster, a professor in the Society, Work and Development Institute at the University of the Witwatersrand, Johannesburg, the team are developing a diagnostic instrument to measure progress towards more and better jobs in the province.

Their first report focuses on the Community Work Programme (CWP), a public employment scheme introduced in 2007 that provides work opportunities for the unemployed. It is based on a similar scheme in India, the Mahatma Gandhi National Rural Employment Guarantee Scheme, which provides rural households with 100 days? of work opportunities per year. The CWP provides access to a minimum level of regular work - 2 days a week (100 days a year) at a wage rate of R60 per day. It provides work to the unemployed "as they are?, regardless of their skills, education, or personal characteristics. It makes government the Employer of Last Resort (ELR).

As a result of this approach, Employment Guarantee Schemes (EGSs) have become a key policy instrument in ameliorating endemic poverty and providing income relief through direct job creation. EGSS are suitable for job creation in developing countries as this creates an infinitely elastic demand for labour at a floor or minimum wage that does not depend upon the long and short-run profits of businesses. It provides the first step into the labour market, a staircase that contributes towards the progressive realisation of decent work. The CWP uses community participation to identify useful work and priorities. Work is decided in Ward Committees or local development fora; it is multi-sectoral and contributes to public/community goods and services.

The next phase of the study involves surveys of key vulnerable sectors of work in Gauteng. The researchers began with a study of private security guards, the fastest occupation in the province. in 2012 they will exand their research to cover farm workers and the hospitality sector. The goal is to align the goal of decent work with a new developmental path for the region.

The aim of this research cluster is three-fold. The three themes are urban livelihoods, state responses to insecurity and alternative developmental paths. We are dealing with these three themes in three countries, India, Brazil and South Africa, presenting case studies from each area in each of the countries. The research is coordinated by two professors from the global South: Prof. Edward Webster of the University of the Witwatersrand (Wits), Johannesburg and Prof. Sharit Bhowmik of the Tata Institute of Social Science (TISS), Mumbai.

This research cluster was launched in April 2010 in Kassel as an interdisciplinary study to examine why economic insecurity is increasing in India and South Africa and how it can be reversed. We extended the study to Brazil in 2011 and  collaborate with our partners at the University of Campinos.

Four workshops have been held.

The aim of the workshop was to introduce members of the project to the debate around social security in the 21st century. It began with a talk on an ILO perspective on social security. This was followed by an account of the origins and nature of the European welfare state and a comparison made with social security in India and South Africa.  The workshop then focused on two research areas, firstly, identifying the forms of work and livelihood strategies emerging in Mumbai and Johannesburg. Secondly, analyzing how governments are responding to economic insecurity through public employment schemes in India and South Africa.

Two PHD fellows were appointed, one from India and one from South Africa. They  presented their proposal at the first t workshop.

The second workshop was hosted by Professor Sharit Bhowmik at the Tata Insitute of Social Sciences in Mumbai. The focus was on a comparison of developmental trajectories in India and South Africa. Field research on the implementation of the Mahatma Gandhi National Rural Employment Guarantee Scheme (MGNREGS) in Dhule and in Ahmedabad was conducted.

3. Workshop, Society Work and Development Institute, 9th and 10th May 2011

The focus of the third workshop was on the preliminary findings of our research on the concept of an employment guarantee in South Africa and the comparison of livelihoods strategies in Mumbai, Johannesburg and Sao Paulo. Papers were also presented on the Indian and Brazilian welfare regimes.

We aim to examine the Bolsa Familia (family grant) that has successfully reached thirteen million families in Brazil under the Lula government. Brazil provides an interesting contrast with South Africa and India as they have chosen a direct cash transfer, rather than a public employment scheme, as the instrument to reduce poverty. They have also achieved the remarkable result of increased formal employment and higher wages through a strategy of consumption-led growth and a minimum wage.  We have included in the programme papers by colleagues at the Centre for the Study of Citizenship at the University of Sao Paulo.

At the end of the workshop, all members of the cluster will be involved in the decision on how to proceed with the publication of the results. Currently, a joint publication in the form of an edited volume has been discussed.

There are four major achievements to date.