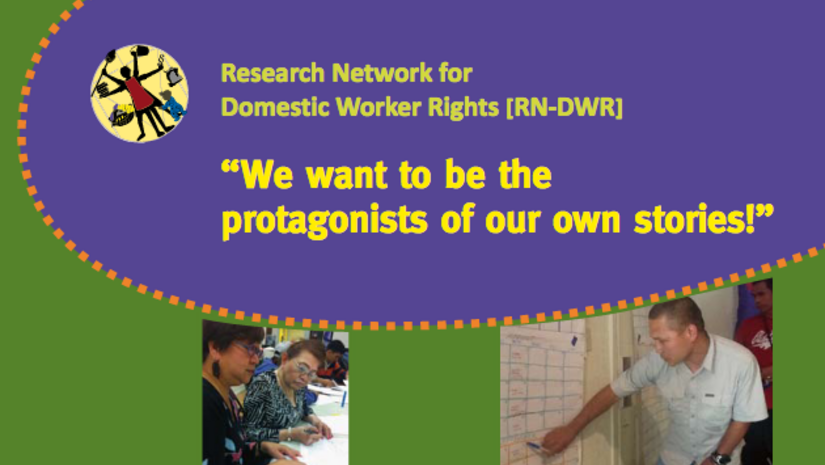 Picture description: Out of the research cluster, in cooperation with alumni of the Global Labor University, a Research Network for Domestic Worker Rights was founded.

Project's aims:
A comparative analysis on how an improvement of working conditions and an empowerment of domestic workers can be reached

What kind of strategies are employed by (migrant) domestic workers, trade unions and civil society groups to improve the working and living conditions of domestic workers?

Domestic workers, particularly migrant domestic workers, are confronted with a range of challenges: the private household is an isolated workplace; they are facing individualized contractual and personal relations between employer and employee and often workers’ rights violations such as low wages, non-payment of wages, working long hours, no privacy, abuse of immigration status. Strategies on how to protect domestic workers and strategies on how they can empower themselves differ significantly. They differ for example from a comparative perspective in relation to the political opportunity structures and the historical legacies in a country. It also differs due to the previous experiences in speaking up and organising oneself which is related to the political culture and to the existence of women’s movements.

Currently the International Labour Organization has put the issue of domestic work on its agenda by discussing and adopting a Convention on “Decent Work for Domestic Workers” (C189). Trade unions as well as domestic workers’ organisations have been mobilizing for it, and are working on having the Convention ratified and implemented worldwide. Nonetheless, there are debates to what extend a Convention will be able to change the situation of domestic workers. The social science research group on domestic work takes up these issues. Its main focus lies in a comparative analysis on how an improvement of working conditions and empowerment of domestic workers can be reached.

The research group consists of members from the ICDD partner institutions and other universities, members from civil society organizations such as trade unions, the International Domestic Worker Network (IDWN) and the RESPECT Network and individuals working in International Organizations. The first workshop took place in Geneva in November 2009; the second workshop was hosted by Universidade de Campinas in July 2010; the third workshop by the Dutch union FNV Bondgenoten in Amsterdam.

Some group members are active in organising (migrant) domestic workers and developing strategies to gain political influence and empowerment. Members of the group have been invited to conferences and talks to provide input on domestic workers’ empowerment and particularly the ongoing discussions on the creation, ratification, and implementation of the international Convention on Decent Work for Domestic Workers within the framework of the ILO.

Out of the research cluster, in cooperation with alumni of the Global Labor University, a Research Network for Domestic Worker Rights was founded. The Research Network was symbolically launched at the 100th International Labor Conference in June 2011 in Geneva, at which also the Convention Decent Work for Domestic Workers was adopted by the assembly of workers, employers, and governments. Currently more than 150 researchers from all over the world are connected via the network, pursuing research on the empowerment of domestic workers, working conditions, and the social rights of domestic workers. A quarterly newsletter informs about current research on domestic work, relevant conferences and political developments, such as the ratification and implementation of the convention. The newsletter brings together information by unionists, activists, and researchers, so that members are aware of issues relating to domestic work.

The research network is currently coordinated at the ICDD.

A joint meeting of the international research team and the Netherland's team took place in Amsterdam, culminating in the graduation ceremony of the domestic workers' interviewers.

The participatory ICDD research project on "Social Security Needs for Domestic Workers", which seeks to research domestic workers' needs for social security as well as their access to social security provisions in the Netherlands and South Africa, convened a meeting in Amsterdam in the beginning of December 2012 to discuss the work in progress.

In May 2014 the "Research Network for Domestic Worker Rights" (RN-DWR) released the manual which is a step-by-step guide through all phases of a research process, from coming up with a research question to celebrating its completion. It contains explanations of research methods and practical group exercises. Authors and domestic worker co-researchers share their experiences, offer tips and materials to work with.

The manual was developed on the basis of the experience from conducting a study of the social security needs of domestic workers in the Netherlands and South Africa. One of the underlying principles of the project was that domestic workers should be part of the research process as “protagonists of their own story” – as one participant summarized her experience.

This manual should be of direct practical use to researchers, trade unions and domestic workers' organizations who would like to conduct participatory research projects.

In mapping and assessing organizing models, the research aims at showing factors and strategies contributing to a successful organizing and mobilizing of (migrant) domestic workers.

A meeting of participants took place as part of the Alumni Applied Research School 2011 in Johannesburg, South Africa.

While paid domestic work takes place all over the world and is a salient sector of the economy as well as a job for many migrants and non-migrants in the global economy, not much is known about the actual number of domestic workers. Helen Schwenken and Lisa-Marie Heimeshoff collected existing data, i.e. official data and estimates of domestic workers and present them together with several co-authors.

Originally the data was assembled in a paper for the IUF to be used in the negotiations for the ILO Convention C189 Decent Work for Domestic Workers.