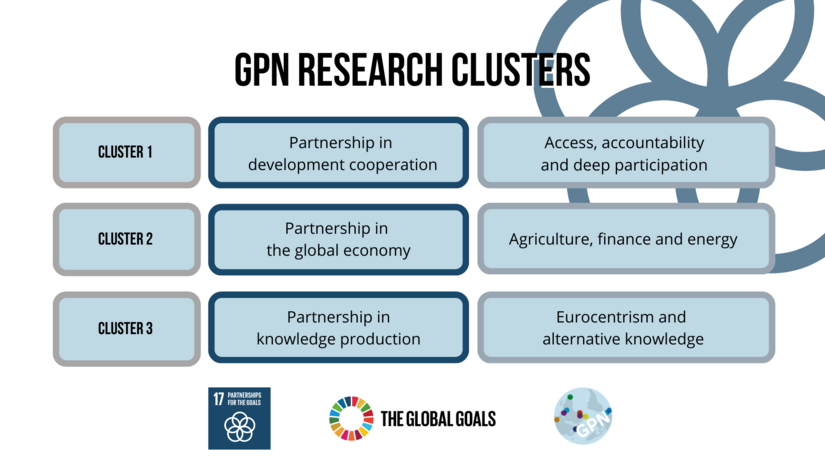 Critical research on development cooperation has concluded that despite its commitment to partnership (manifest already before SDG 17 in the principles of the Paris Declaration of 2005 and in earlier concepts) it suffers from at least three problems: 1) Its benefits are distributed unevenly and seldom reach marginalised groups (in particular women and indigenous people) (Kabeer 1994, Townsend 1995, Young 1995, Visvanathan et al. 2011, Radcliffe 2015). 2) It sometimes has problematic or even catastrophic side-effects (e.g. development-induced displacement) on its supposed beneficiaries or other project-affected people who can do little about it because of asymmetrical relations of power (Seabrook 1993, Ferguson 1994, Fox/Brown 1998, Clark et al. 2003, de Wet 2006, Easterly 2013). 3) Its mechanisms of participation are confined by the structures of the development apparatus (Cooke/Kothari 2001, Hickey/Mohan 2004, Mosse 2005, Li 2007).

Therefore, the GPN will focus on:

A serious pursuit of the SDGs requires partnerships in the global economy: The principle of policy coherence (also officially endorsed since the Paris Declaration and central to SDG 17 target 13 and 14) maintains that successful poverty reduction must not be confined to development cooperation, but has to go ‘beyond aid’ (Browne 1999) and include coherent global governance in the different fields of the global economy, preventing a situation where measures of development policy are thwarted by foreign economic policies of donor states (Ashoff 2005, Messner 2005, Ziai 2007, s. also BMZ 2017). Therefore global economic structures have to be taken into account when talking about a global partnership for sustainable development. The GPN will concentrate on three policy fields with particular significance for the SDGs, whose problem constellations and challenges highlight the importance of strong partnerships: agriculture, finance, and energy. For these fields it will provide policy recommendations for policy coherence and successful partnerships in the global economy, in particular regarding the following aspects:

In all three areas, the GPN will investigate practical examples of partnerships and explore the reasons for success and failure, providing analysis and policy recommendations for policy coherence and partnerships in the global economy. This complements cluster 1 by including policy fields beyond development cooperation which are crucial to realizing the Sustainable Development Goals.

Knowledge sharing between partners is also a part of SDG 17 (targets 6 and 16), but whose knowledge is envisioned to be shared? The Post-Development critique (Sachs 2010, Escobar 2012, Rahnema 1997, Rist 2014) has pointed out the Eurocentrism prevalent in development knowledge: Eurocentric ontologies assume a linear scale of social evolution, at the top of which we find the ‘developed’ (i.e. industrialised, secular, capitalist, democratic) European societies (including the European settler colonies in North America and Australia). This assumption, implying e.g. that knowledge about progressive social change which helps the global South to advance along this universal scale can be found in the North and that development experts possess this knowledge (Nandy 1988, Apffel-Marglin/Marglin 1990 and 1996, Mitchell 2002, Eriksson Baaz 2005, Ziai 2016), has been challenged by postcolonial theorists stressing mutual learning; alternative, local, non- Western (to be precise: non-hegemonic, because they can also be found in the West) knowledges; and pluriversal epistemologies (Connell 2007, Comaroff and Comaroff 2015, Santos 2007 and 2014, Bhambra 2014, Ndlovu 2014, Reiter 2018, Kothari et al. 2019) and alternative, participatory and decolonised pathways to knowledge production and co-construction (Smith 2013, Bendix et al. 2019).

The GPN will investigate these alternative knowledge, their generation, diffusion and translation, and the possibilities they provide for progressive social change from the bottom up. Through providing fora and encouraging inter-cultural dialogue including marginalised peoples, it will contribute to mutual learning and foster partnerships in knowledge production. In this way, cluster 3 can also cross-fertilise and enhance the partnerships in development cooperation and global economic structures.